Challenging times offer the opportunity to be still within the chaos. They are an invitation to set anchor, and be calm in the choppy, rough waters that surround us. Feeling as if we are floating completely out of control is not fun, but we do have the ability to find our center no matter where the current of life takes us.

Jenny Liu, a Taoist “fate calculator” tells us that fish don’t swim, they are swum. When we trust in the force that moves us and be present and in the flow, we can learn to ride rather than resist the unexpected currents of life.

After I taught my last class at the studio, I was excited to be a participant, enjoying yoga and Pilates side-by-side with you lovely, devoted students. I had expected to see everyone, in or out of class, at least one more time before heading to Hawaii. Dean was coming back to help me drive to Los Angeles with the dogs, and we would have plenty of time to share laughter and give hugs.

My dad called. “I don’t want to alarm you, but I haven’t been feeling too well,” he said with a hint of undeniable agony. I suggested we go to the hospital, as he mentioned having a high fever, dizzy spells, and couldn’t keep anything he ate in his stomach, for quite some time. “No, I just have the flu. Give it a day and we’ll see.”

Um, no. So I drove up the Westfork and brought him to Dolores. Just as I suspected, dad wasn’t looking too good. Off to the ER we went. After speaking with the ER doc who contacted a urologist on call in the early morning hours, he was advised and able to schedule his bladder stone surgery in Grand Junction, instead of waiting for his appointment in Durango. 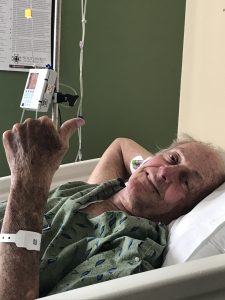 After two separate trips to the ER, and two nights in the hospital with a UTI and a prescription for stronger antibiotics, my dad was discharged on Thanksgiving Day, with an order to rest and nurse his tired body. Well, an order for ‘someone’ to nurse his tired body. With the last-minute preparations to get ready for the move, every second of my day was utilized with the unexpected call of duty, and I was running out of time.

Thank God for Dean. How could you not see the world through rose colored lenses with his smile beaming at you? I picked him up from the Durango airport and said, “Honey, it’s time to hustle.” What a huge help my hubby is. 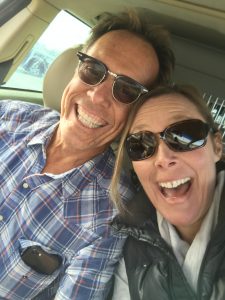 Now, with just three days to get it all done, we found ourselves eating meals while standing, making phone calls from the bathroom ‘throne,’ and attempting to keep the important papers from getting lost in the shuffle. Speaking of important papers, Dean drops the bomb and says the Hawaii Department of Agriculture checklist I had been following for 4 months to get the dogs ready for the move was outdated. Add a Saturday overnight FedEx chore to the mix and what do you have? One stressed-out Jill.

We rolled out of town the Monday after Thanksgiving. My dad was healthy and back at home. Somewhere along the road, the dogs needed a potty break, so we pulled off the highway and found ourselves on the corner of Dean Drive and Paradise Trails Road. Our rose colored glasses were back on. 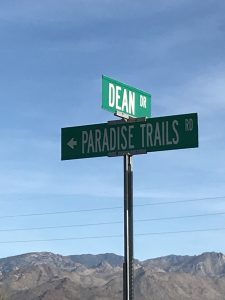 Welcome to Los Angeles, where even the dogs think they’re famous.

We stayed in a high-rise hotel on the outskirts of Beverly Hills, as Dean had some people to meet. Grateful our hotel catered to pet owners and their pets, however, we still had to brave the busy lobby that hosts nightly happy hour. With our furry friends who only know running wild up at Boggy Draw, how do you keep your cool with two dogs on a leash in the middle of a cocktail party? It’s all in the name.

That’s right. His name is Buddy, and he is astonished everyone seems to know. “I must be famous,” he thinks. With a wag of a tail and a friendly grin, he shows Greta how to behave in the big city. 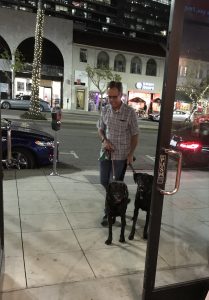 The day before we fly to Maui, I was so worried about the dogs being on that plane that I couldn’t stop grinding my teeth. I decided I might as well stuff something in between them and put all that clenching to good use. No, I did not reach for the mouth guard. Instead, we indulge in peel-and-eat shrimp. I used the Sunday New York Times crossword puzzle to keep my mind off my own fear of flying. And yes, those are Bloody Mary’s. What can I say. 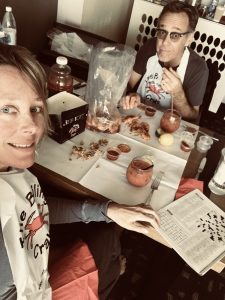 The next morning marked the anniversary of one man completely losing his cool. I don’t think I have ever seen Dean that angry, and certainly never that angry with me. I could have crawled under a bridge and joined the homeless after an unexpected circumstance at the United Airlines cargo desk.

We were denied flying because the dog’s health certificates were two days too old.

“Can we speak with your manager?”

Bad idea. Never ask for the higher-ups when you are looking to fudge your paperwork.

“Everybody flying to Hawaii gets this wrong,” cracks the manager between laughs.

“Oh yeah? Well, f*ck you too,” is all Dean could cough up in this most devastating moment in time, as he turned to look at me expecting some kind of resolve.

Without getting into the details of a husband and wife having a complete meltdown, all I can say is this setback actually turned out for the better. But first, I needed round two. Hello crab legs. 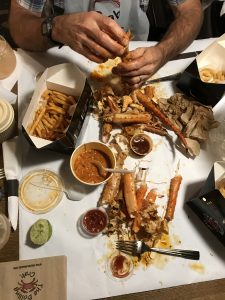 We were able to visit a vet that day, and get new health certificates. We were able to change our flight to leave the next day. We were able to upgrade Buddy’s travel crate to a larger size. While the airlines told me absolutely no flights from LA to Maui accepted the bigger crates (they wouldn’t fit through the plane’s cargo door) the plane we were put on happened to be a 757 and a bigger crate was not a problem. That was unexpected, and graciously appreciated. In addition, our first class upgrade was also transferred, and since this was a bigger plane, our seats were of the super-deluxe variety. I could literally do downward dog in front of my seat without touching the seat in front of me. Dean was no longer angry, in fact, he was amused by my ability to express how excited I was to have so much room! The flight attendants told us Buddy and Greta were loaded on the plane and doing well, and we were looking through our rose colored first-class windows, with fancy pillows and a silky Saks Fifth Avenue down blanket. 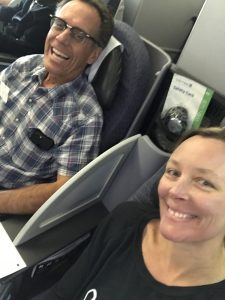 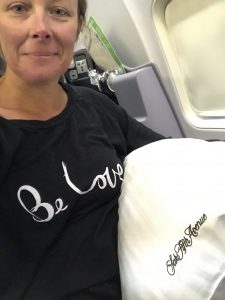 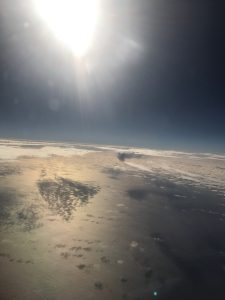 So far, I love Hawaii. There is something uniquely special about it. The smells, the sounds, the people…. It speaks to my heart and I couldn’t help but feel that again just as soon as we stepped off the plane. The dogs did great. When we met them at the Kahului airport cargo station, they were calm, yet happy to see us. I think the preparations of getting them used to the crates helped them (and me)!

Reunited, and it feels so good! 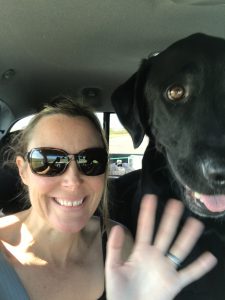 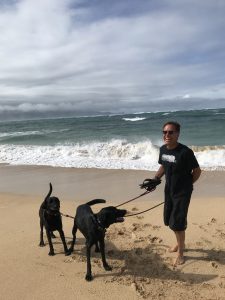 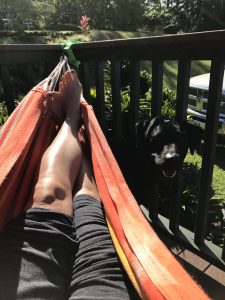 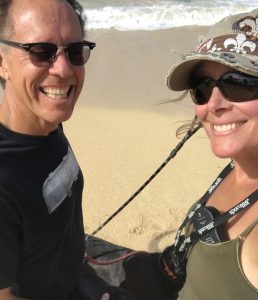 As I was getting comfortable in our new house, which is wonderful in every way, I began to decompress and start the process of unwinding after a crazy couple of weeks. Dean was in a good groove at work, and we were looking forward to the company Christmas party, which happened to be the same day my dad was scheduled for his bladder stone surgery in Grand Junction.

During the party, we got a phone call. “Jill, your dad had a reaction to the penicillin,” says Bev, who accompanied him to St. Mary’s hospital. “He’s in ICU. I think you better get here now.”

Well, that was unexpected.

Not only was the anaphylactic shock shocking to all, the cascade of events that nearly landed him six-feet under caught him, us, the nurses, and his doctor, completely off-guard.

The wise sages equate life to surfing. Sometimes you ride the wave, sometimes you crash in a sea of pounding surf, but eventually the ocean calms and gives us a chance to come up for air. I was doing swimmingly well in my new digs, and I was not in the right frame of mind to be swum. It was time to go deep and find my anchor. 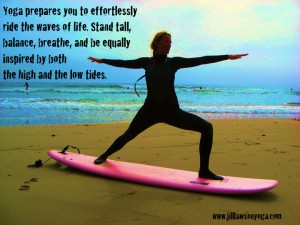 Eleven days in the ICU, riding the ultimate wave between life and death, my dad eventually came up for air. Don’t ever let someone tell you that prayers don’t work. They do. Yours did. Every visit, conversation, text, well wish, and thought, made a difference; especially the warm, red Christmas blanket from Cindy. Thank you!

Now on the road to recovery, my dad continues to work hard doing his exercises; some walking, and a lot of what looks like Pilates in bed! He’s out of ICU and currently being assessed for the best plan to get him strong enough to get that stone out, and then come to Hawaii to relax and regroup. 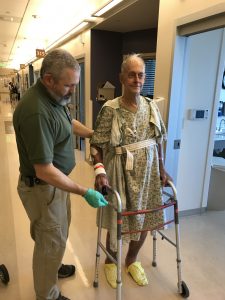 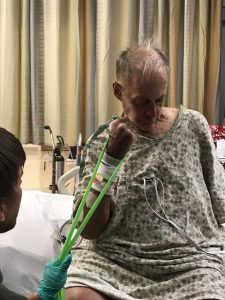 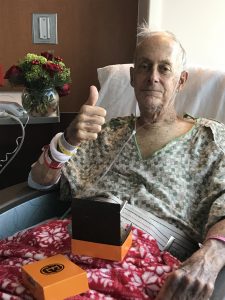 Lose yourself in the service of others.

Taoist master of fate, Jenny Liu, also said birds don’t fly, they’re flown. It takes a lot of energy to resist the flow, whether it is water or air. I was resisting being flown into the current back to Colorado. I was feeling selfish and angry for having to leave my new Hawaiian sanctuary after returning to a life with Dean and the dogs. I was upset.

What I learned during those rough days in the hospital with my dad was that I was committed to being there for him. I reflected on the lives of those who have shown us that service is the ultimate form of love. Duty, sacrifice, and selfless actions are what help promote all good things in this world. I needed to get out of my way and serve. Duty called, and it would have been a tragedy to miss that call.

The best thing we can do for ourselves is show our kindness and gratitude for the blessings in our lives. Love makes a difference. That is what carries us peacefully along the current of life, whether we fly, are flown, swim or are swum.

I returned to Maui on Christmas Day. I was able to spend the morning with my dad, watching him indulge in Enstrom’s toffee, and then be greeted by Dean and the dogs that evening. Each day my dad makes excellent progress. He is walking longer, feeling better, and hopeful he can get that stone out soon.

Expect the unexpected, but even better, learn how to return to the anchor that holds you in peace within the turbulent storms of life. Every day be fortunate you have woken up, commit yourself to service, and ride rather than resist the waves of change. 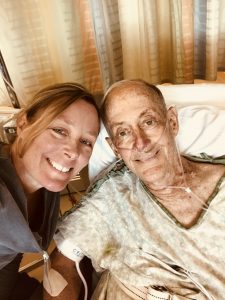 Click here to cancel reply.
« Procrastinators Rejoice! Time is Relative
Blue Skies Are All I See »